Production values of the film are top notch. The makers have spent good money and have showcased the US setup well. On the whole Nuvvu Thopu Raa is a dragged out masala entertainer which lacks proper execution. Sudhakar Komakula leads from the front but he too cannot the save the film after a point as the narration is jaded and the proceedings are lenghty. Hurried up climax, aimless story make things even worse. Except for the film being set in the US and Varun Sandesh?s screen presence, this film has nothing interesting going it's way. Watch it when it is aired on television.

The story-telling boasts positives in terms of Sudhakar's earnest dialogue-delivery. The hero, born and brought up in Vizag, gets into the skin of a character that speaks in the Hyderabadi slang. The character's equations with his mother should have been explored in a bigger way. Despite the limitations of the segment, Nirosha's performance is nearly flawless. A few interesting sub-plots would have made it all the more alluring. It would have also helped to unflesh the hero's scenes with his friends. 'Nuvvu Thopu Raa' comes with a decent storyline. However, it gets blighted by a weak directorial vision. Many scenes lack substance. Ordinary scenes could have been uplifted by incisive dialogue and greater intensity. 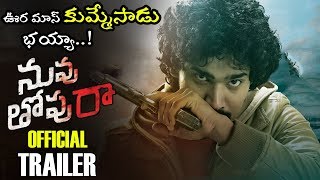